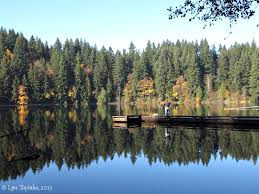 Surrounded by scenic views of Mt. St. Helen's and South to Mt. Hood and gentle rolling hills and farmland and tall stately Firs.  Tucked into a metro area that has all the goods and shopping right here.  Country living at it's best centrally located minutes to some of the best arts & theater in Portland.  Savor the 5 star dining and entertainment in the city and enjoy the incredible recreation available here in our own back yard.
Some of the best fishing spots around right here.  Steelhead, Salmon, Bass and trout.  Kayak, canoe, boating right here.  We have the Lewis River in our backyard and Lake Merwin and Yale famous for the best water boarding around.  Hunting, skiing up at Mt. Hood is a short drive away~ Summer and winter sports Haven.

The first known settler to homestead the Battle Ground area was John Tuke. In 1862, he chose the area near the hill now known as Tuke's Mountain for his farm.

Origin of the Name "Battle Ground"

The city is ironically named for the absence of a battle. In 1855 many of the soldiers at nearby Fort Vancouver were away fighting an uprising by the Yakima Indian tribe. Nervous settlers organized a company of volunteers to guard the undermanned fort. Fearing that the friendly Klickitat Tribe on the Lewis River would join the uprising, the volunteers ordered them into the Vancouver Barracks near the fort.

When some of the Klickitats escaped, Captain William Strong, the post commander, led a detachment of volunteers to bring them back. They overtook the Klickitats near the current location of the city, but rather than engaging them in battle, Captain Strong talked them into agreeing to return to the fort peacefully. Somehow during this episode the Klickitat leader, Chief Umtuch, was slain in battle. The circumstances of his death are unclear: some said he was killed by a soldier, others by an accidental gunshot from his own men. In any event, the Klickitats promised to return to the fort after burying their chief, a ceremony that would take several days, so Strong returned without them.

The settlers had been expecting a battle, and when Strong returned empty-handed, they accused him of cowardice. The Klickitats did return as promised, but criticism of Strong continued. The women of the fort awarded him a petticoat of many colors in mock celebration of his courage. And the area where the Klickitats were encountered became known as "Strong's Battle Ground," and later simply "Battle Ground
Battle Ground was officially incorporated on June 18, 1951.

According to the United States Census Bureau, the city has a total area of 3.6 square miles (9.4 km²), all of it land.

Battle Ground Schools Are Located By Place: The Battle of Captain Strong and Chief Umtuch Was fought in Tukes Valley.

There were 3,071 households out of which 50.4% had children under the age of 18 living with them, 58.9% were married couples living together, 12.0% had a female householder with no husband present, and 23.6% were non-families. 18.2% of all households were made up of individuals and 7.7% had someone living alone who was 65 years of age or older. The average household size was 2.99 and the average family size was 3.43.

Transportation
Battle Ground is accessed from Interstate 5 at exit 11 and Interstate 205 at exit 32.

[edit] CommunityC
Every year in the summer time Battle Ground puts on Harvest Days. There are a number of community events including parades, street dances, a carnival and chili cook-off. Battle Ground is an almost yearly winner for the Float Best Exemplifying Community Or Civic Involvement And Pride in the Portland Rose Festival's Grand Floral Parade. In 2006, however, it received the Sweepstakes Award for Most Outstanding Float In The Parade.

Actress and singer Bethany Joy Galeotti, a star of the TV series One Tree Hill, resides in Battle Ground with her husband, Enation drummer Michael Galeotti, when she is not filming in Wilmington, North Carolina.